All the Evidence from Primates ONLY Shows Genetic Degradation. by James Arjuna 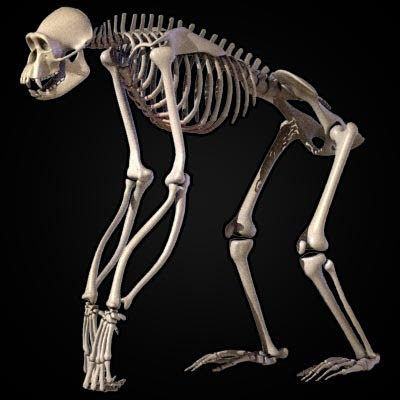 Does the Chimpanzee look like a highly "evolved" creature or one that is sickly, weak can't stand upright any longer and has bent forearm bones from being forced by degradation to walk on all fours from weak back, spine, and weak pelvis.  Those bent forearm bones clearly depict force on bones not intended for walking.
The caved in skull shows lost genetics. Consider that it is nearly extinct and only is showing the path that humans are on if we continue to produce fetal mutations.  Diseases parents produce diseased babies.

Every single piece of evidence, from DNA, can  CLEARLY be seen as ONLY genetic degradation leading to extinction.

Evolution is one way towards extinction.   These modern emotional humans who cannot deal with reality,  think that chimpanzees are representative of a prior lower level of fitness.

They do DNA comparisons of the obviously genetically degraded and going extinct Chimpanzee and other primates and make the ridiculous assumption, based on brainwashing and beliefs projected,  that this shows evolution.

We know from the study of DNA that there are some 100,000 minimum deleterious mutations making human sickly and weak compared to our ancestors.


There are now (2016) well over 10,000,000  peer reviewed papers from all over the world clearly showing that humans are degraded, have never "evolved" and at the present rate of the rise of genetic defects our species will be reduced to retarded short living animals with no technology, no speech, no intelligence.  Just take a look at our cousins the Chimpanzee.  Clearly evidence of where we are heading.
http://www.ncbi.nlm.nih.gov/gquery/?term=Human+Genetic+Diseases

The problem to overcome is that when we see a duplication now it is ONLY found to be part of horrible genetic diseases. This is because having an extra piece of protein and no way to use it causes diseases.  You need HOX genes and regulation genes integrate it.  It needs to be integrated in the immune system and recognized as part of the over all design, so that the immune system doesn't attack it (autoimmune diseases)  Therefor there is no mechanism for evolution.

And we can only see this is the real evidence we find everywhere. It is only the retarded religious Evo-nutcases  who see this as some magical process. Chimps, gorillas and orangutans are all sickly weak and going extinct. They represent the future of humans.
There are no beneficial mutations ever found in any verifiable study on human or primates. End of evolution.

Why do you need to believe in this myth so much? Are you unable to deal with reality?  Without God there is no hope for humanity. This is absolute.

Here is some of this retarded "evolution" BS:

"To reconstruct the evolution of the **duplication events, we generated a multiple-sequence alignment for a 244.2 kbp region that is shared among the three contigs by using orthologous sequence from chimpanzee (build GGSC 2.1.3/panTro3) and orangutan (build WUGSC 2.0.2/ponAbe2) as outgroups (Figure 2B). Phylogenetic analysis provides strong support (>99%) for distinct duplication events occurring at different time points during human evolution. Notably, we find that the duplicated sequences have evolved much more rapidly (Tajima's relative rate test; p = 0.00001-0.0249) than the ancestral 1q32.1 locus (p = 0.5345). Mutation rates are known to vary significantly depending on chromosomal location and context (CSAC, 2005). Based on analysis of unique orthologous sequence adjacent to the SRGAP2C duplicate region, we determined that the distal 1p12 region shows a 20%-46% higher substitution rate when compared to 1q32.1. If we adjust for this difference, calibrating to the estimated 1q32.1 substitution rate, we predict that the initial duplication occurred ∼3.4 mya and that the secondary event occurred ∼2.4 mya. We note that estimates of molecular divergence between the paralogs are robust (e.g., 0.451 ± 0.014% substitutions per site between the SRGAP2B and SRGAP2C loci), owing to the large number of substitutions discovered in the high-quality sequence used in these comparisons (Table 1). Some uncertainty in our estimates comes from our correction factor for differing substitution rates, but most uncertainty arises from ambiguity in the evolutionary timing of the divergence of chimpanzee and human (estimated at ∼6 mya) (Patterson et al., 2006). If we take into account previously reported human and chimpanzee divergence times ranging from ∼5-7 mya, based on fossil records ( Brunet et al., 2002, Brunet et al., 2005 and Vignaud et al., 2002) as well as recent genetic analyses (Patterson et al., 2006), we estimate that the initial duplication occurred 2.8-3.9 mya, followed by the secondary duplication at 2.0-2.8 mya. We also performed phylogenetic analysis of the 9,541 bp region shared among the SRGAP2A-C paralogs and the incompletely sequenced SRGAP2D and determined that this copy was derived from the SRGAP2B locus ∼1 mya (0.4-1.3 mya assuming a 6 mya divergence time for human and chimpanzee). Using comparative FISH analysis and probes mapping outside of the original duplication (Figure 2C), we determined the likely order of events: the ancestral SRGAP2A region duplicated first to 1q21.1 (SRGAP2B), and later the 1q21.1 copy duplicated to chromosome 1p12 (SRGAP2C) and within 1q21.1 (SRGAP2D)."

**In the current duplication mutations found today are all part of HORRIBLE diseases.  Therefor it would seem impossible for any duplication to have any real function other than to screw up existing health.
http://www.ncbi.nlm.nih.gov/pmc/?term=Human%20%20Duplication%20Mutations

The HUGE elephant in the room is that they do not have 3.4 million year old human DNA to sample.  It does not exist. So these religious pathetic victims of the education system,  will tell you that they believe several duplications took place, but utterly FAIL to show any reference to the prior condition in any human.  All we know is that we are more intelligent than chimpanzees and they have at least 18 deleterious mutations in just one HAR-1 gene.  Chimps are dumb animals because they are so degraded that they are now going extinct.

I love people, don't get me wrong but, I mean how can they be so stupid as to overlook what is clearly obvious: Chimps and all great apes are RAPIDLY going extinct.  They have never improved and only show much higher level of degradation.


Every single one of those differences only show genetic degradation in the chimpanzees And in the physical evidence we find the chimps are retarded and sickly, going extinct. For some people to declare that the genetic losses in Chimpanzees and in other great apes indicates the "prior condition" can only come from faith and for no other reason. There is only genetic degradation shown in all DNA studies we have today. But in the "magical times" of the "evotard fairy" science worked differently and mutation magically added complexity.  Modern humans without Jehovah God cannot deal with reality.

Chromosome #2 in humans shows another form of degradation. A fusion is considered to be a defect in every genetics study I have seen. The fact that it shows that our superior human common ancestors between the chimps and humans had the 48 chromosomes only testifies to part of how humans have degraded.

The chimpanzee and human connection is clear evidence of genetic degradation.

Here's a video where Ken Miller clearly demonstrates that the chimp and human connection shows degradation.


All of the evidence from Chimpanzees and Human studies only shows genetic degradation.

The chimpanzee is nearly extinct. It has all the same diseases as humans or the primate version, has some estimated 160,000 deleterious mutations, can't live past 30 years in the wild with an average age of 15; has trouble reproducing and estimated 600 of them left in the wild. The rest are in guarded compounds.

We gain an average of 3 to 20 deleterious mutations per generation. That seems to be rather "optimistic", considering the rapid rise of genetic diseases.

There is only genetic degradation shown in evidence. The chimp is not representative of a lower condition waiting to evolve into something better. It is perfect evidence of the path that humans are on of genetic suicide. Humans are not capable of managing health. They like spreading diseases and they seem to have no concern for the future of humanity.

Chimpanzees are clearly and OBVIOUSLY a message to us where we are heading.

At the present rate of mutations humans will for certain be extinct in less than 100 years. But with the fact that we cannot live without technology and the medical industry, as soon as our brain function drops just a little (not much left ) we will shorten the time because we will not be able to understand how to use technology at all. So, we may not last even 100 years.  No medical, no drugs, no technolgy, no humans.

Understanding technology enough to keep it going, and not even to advance it is needed for survival. I don't think that level of intelligence is going to last very long. We have pandemic mental illnesses, and 1 in 38 boys born with autism(2016)

The chimpanzee's first loss that limited them was intelligence and they only survive because they have strength and teeth left to eat and kill with.

You are either on the side of the truth, life, health (preserving what is left of human correctly coding genes), joy for living, or on the side of continued rapid destruction (from diseases) of the human species from mutations.

There is no gray area.